Your Success Is in Your Hands 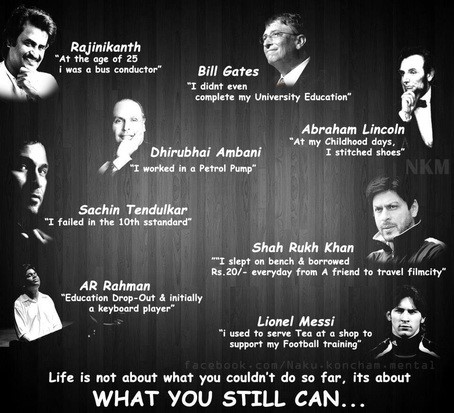 For each and every individual, the word Success has a certain meaning. For some it may mean monetary independence, for some achieving a goal, for some doing what they love.

Success follows brilliance, a complete understanding of which will lead a person not in the pursue of Success but of Excellence in what ever that is they do. Once you understand that, half your battle is won. For instance see Olympic champions or sport persons, when they play, they put all their efforts and hard work into it. Once done, they sit back and enjoy the result, enjoy the Success that those efforts bring them.

So how do you achieve this Excellence in your life? One most important principle is of doing what you are most passionate about. You love Art and join Medical collage instead is an example of going in the wrong direction. Once you figure out What You Want, the next step is to say it out loud and let everyone around you know that this is your dream and you will follow it by all means. Any resistance at that point and your firm determination to follow your dream will eventually benefit you itself. The only person living your life is you, and the only person who should care for it should also be You. So acknowledge your strengths, continue climbing mountains and following rainbows. The struggles which we will encounter now will eventually help us gain a greater perspective and that will give a whole new definition and meaning to our life.

For instance Bill Gates’ story is not a ‘rags to riches’ fairytale. Instead, it is a great example of what one can do with the talents that he has within him. The growth of Microsoft is largely due to the fact that Gates ensured that most computers that shipped out came with Microsoft software pre-installed, thereby ‘killing’ any desire by consumers to purchase any other type of software. So what do you think? Is Gates the greatest business leader of our time or just a very conniving one? Whatever one thinks, one thing is for sure, the name Bill Gates will continue to resonate in the field of business. Did he not know that doing something like that might cause him problem? But that didn’t stop him from getting what he desired, then why should you let any fear be big enough to block your path??

“Pursue your goals even in the face of difficulties, and convert adversities into opportunities.”

“You do not require an invitation to make profits.”-

He founded India’s first Fortune Global 500 company. He was the visionary behind the industrial group which accounts for more than 3 per cent of India’s GDP, about 5 per cent of the country’s total exports and 30 per cent of the profits made by private sector companies. About 35 lakh people have a direct interest in Reliance Industries which, post-merger, will have more shareholders than any other company in the world. The facts, as it were, speak for themselves. They tell a story of a truly global giant, of an Indian private sector industrial house which climbed swiftly to the peak leaving behind most others to labor in the foothills.

So who really was this man? The son of a school teacher in rural Gujarat, who failed to pass his school exams in the first attempt and earned his first money as a child selling snacks to pilgrims over weekends or someone who had a vision and became the largest polyester dealer in the country. He too was faced with many problems of his own, but success follows when you aim high and put efforts to achieve your goals.

Handwriting analysis helps you achieve this success in life by not only telling you what you are and where you stand but also giving you new hopes to reach your goal and true your dreams. My new book,”Grapho-therapy with Mind power” will be available shortly. It is one sure way of being able to change the way you see yourself and ultimately change your world as well.