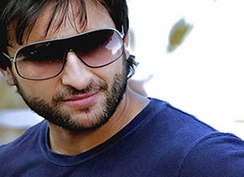 Saif Ali Kahn Pataudi is the son of famous Sharmila Tagore and Mansoor Ali Khan Pataudi. He made his debut in the film Parampara in 1992. Saif is known for his comic timing and we simply love some movies of his such as AAshiq Awara, and Dil Cahta Hai for which he has won Film Fare Best Comedian award.

I to write the letter “F” just the way Saif does, what does that make me??

Ok let’s put it this way, money is important and you should be able to admit that. After all if you want money, then money will also want you. If you feel ashamed to admit it, money to will be ashamed of you and won’t come to you easily. Now looking at the writing again, the alphabet “F” written differently also shows the desire to be different from the crowd. He has an identity and he wants he say, hey, “I am Saif” and I have achieved something. He wants to do things in his way and that’s what his writing to is showing. His signature is bigger than the writing and that shows a good ego, which again is a positive sign.

I do hope that this information has been interesting to you and here are a few more tips to attract money into your life.

Aim high, if you don’t have high goals how will you achieve anything?   This is due to the attitude that we have towards money, we see it as something that can cause harm and something that cannot buy everything. When we give out money to someone, even though we may not say it, but the thought comes that money is going out of our hand. This thinking is what leads the money to actually walk away from us.

1) First and foremost, think that you have enough money to meet all your demands and are living a truly happy life of your choice.

2) Then you see yourself surrounded by money, see that money is coming to you easily and effortlessly and that your bank balance is growing day by day.

3) When ever you pay someone, think that the sum will double itself and come back to you.

4) In Feng Shui , they believe that the southwest corner of a house is the money corner and that the colors green, purple and red help in generating more income. Also the house which you live in should be clutter free and broken things from the house

Speech given in BCG Meet Traits to Avoid in Handwriting Analysis. The science of Handwriting