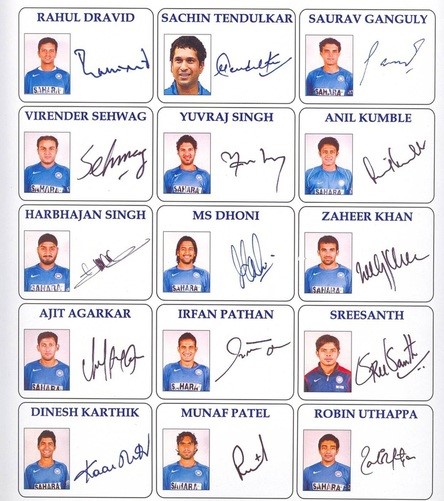 Usually I have given an analysis on one person or two but this time, I would like to conduct a complete analysis on the Indian Cricket Team. These are the players whose signatures I happened to find by chance.

Rahul Dravid: Looking at Rahul’s signature you can see that Rahul has a backward slant. Usually people like these are reserved and talk to you only if the need arises. Rahul has lots of inner pride and wants to be treated with respect. His writing shows that he has an inner intuition that he should rely on as it will benefit him to a great extent.

Sachin Tendulkar: the master batsmen who looks in very good form while playing for Mumbai Indians has a lot going for him. Check out his analysis in the given link.

Saurav Ganguli: it so happens that I have a previous signature of Saurav as well and I would like to comment on both his signatures.

The first one and the second one are quite different from one another but are yet same.

Well notice the first letter in both the signatures. The first one is slighter larger than the second one. It is a possibility that this signature would have been taken at a time when Saurav was the captain and the second one is of 2007 time period. The gap that he leaves in between shows that he feels himself separate from the family name. nothing serious, maybe just a way of saying that I am Saurav and I am something. Now let me bring your attention to the last letter of both signatures, in the first one it is bloated up like a balloon ,in handwriting analysis it is an indication of a person who has an open mind and allows other people’s idea to come in. that’s not a bad trait, but the enormous way it has blown up is surely not a good sign because, you tend to let each and every person’s idea enter your mind and we all know that “too many cooks, spoil the broth”. In the second signature however the loop is smaller and there is a little underline beneath his name. that’s good because he is still listening, but only to few and selected people. The underline signifies leadership qualities, however I would be happier if he were to complete his “l” than leave it in the middle.

Virendra Sehwag: Sehwag’s signature is very clear and had we not had a picture of him there or the spelling of his name, we would still have recognized it. It means that Sehwag is a person who presents himself to the world just the way he is. He may be a friendly person, but he would place his trust on only few and selected bunch of people. He has a good self esteem, and leadership qualities as well.

Yuvraj Singh: I have always loved to watch Yvraj bat .The man has a charisma that shows on and off the field. His signature says that he wants to be seen but you won’t know who the true Yuvraj is. He is a simple down to earth kind of person and lots of energy which he does take out on the opposing bowler. He loves to travel and is fond of good food.

Anil Kumble: his signature says that he is a person who is very reliable and his writing indicates speed of thought, action and perception. He is a person who would like to finish his job fast, impatience is a part of his personality. His down strokes are heavy and that shows determination to do a job. In the game of cricket it is a desirable quality.

Harbhajan Singh: just like his signature, this person wants to be seen, but not known. He is a determined individual and has leadership qualities. However you will just not know who the real Harbhajan is in real life. He might have the capacity to surprise you.

M S Dhoni: he signs his name as Mahi and has huge loops in the “m” , that’s a sign of a person who loves responsibility. He has a need to be required by a lot of people and he will some how make himself responsible for the task and get it done as well. He also tends to take in many opinions and that might just not suit him well.

Zaheer Khan: his signature tells us that he is a intelligent person who will take in people and situations instantly. The next time you see him on the filed, make sure to watch his moves as well, you will know what I mean.

Ajit Agarkar: now this individual is a person will think with his head and not allow emotions to get in the way of his decision making. He is aggressive and also note that his name is larger than his surname, this may be due to certain issues he may have with the family or he just doesn’t like his surname.

Irfan Pathan: he is a person who has a temper and also lots of confidence in himself. But his handwriting also shows caution so the temper won’t come out easily and if makes his mind to do something, he will not rest unless he finishes the task.

Sree Shanth: now this individual is one who likes to be seen and also you can see him just as he is. He likes attention and will do things that will make people notice him. He has a good self esteem and also leadership qualities.

Dinesh Karthink: his signature tells us that Dinesh doesn’t like to be told what to do and he has the quality of intuition in him. He will go in a social outing and hold himself back, then allow himself to mingle again. Done very subtly.

Munaf patel: Munaf is a person who will want to do some task but do it in such a way that you won’t understand what he is up to till the last moment. He has a tendency to be in a sorry situation for longer than necessary.

Robin Uttapa: He is an individual who feels that he is different from the rest, he would feel hurt if anyone were to criticize his way of thinking.

One thing that is common in the entire team is the upward slant in their signature, who shows optimism, the underline beneath the name which shows an inner confidence in themselves. All five fingers are not the same and naturally every individual have their own identities as well. When you place the right person to do the right job, or you treat them in the right manner, you get the work done faster and more better than what you had imagined before. 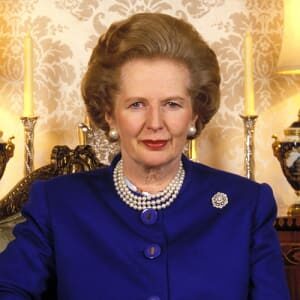