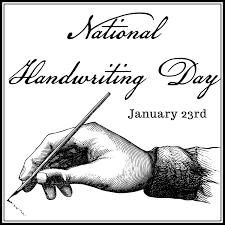 National Handwriting Day is its own day on January 23rd. It was initiated in the early 1980s by the Writing Instrument Manufacturers Association to benefit their members. Handwriting analysis groups jumped on the bandwagon and have used it ever since to garner some publicity. The date was chosen because it is John Hancock’s birthday. Hancock’s signature from the Declaration of Independence is well known for its large, bold attitude. It is said that he did that so King George could read the document without having to put on his spectacles.

The purpose of National Handwriting Day is to alert the public to the importance of handwriting. It is a chance for all of us to re-explore the purity and power of handwriting. Writing by hand is different from typing because it requires using strokes to create a letter, rather than just selecting the whole letter by touching a key, says Virginia Berninger a professor of psychology at the University of Washington. These finger movements activate large regions of the brain involved in thinking, memory, and language.

The act of physically gripping a pen or pencil and practicing the swirls, curls and connections of cursive handwriting activates parts of the brain that lead increase language fluency. Writing is, by nature, an opportunity for creativity and personal expression. When writing is incorporated in learning and assessment, there is increased opportunity to produce the ideal situation for active, attentive learning because students value creative problem solving or creative production.

They’re more likely to apply the effort, collaborate successfully, ask questions, revise work, and review foundational knowledge because they want to know what you have to teach. “Judy Willis”, a board-certified neurologist in Santa Barbara, California.

In the past few years Handwriting or rather  Cursive Handwriting is being rooted out from the schools, as they feel its no longer necessary to teach cursive writing to children in schools. The American Handwriting Analysis Foundation (AHAF), a 48 year-old non-profit organization, is encouraging the return of cursive handwriting to the US public school system. On January 23rd, National Handwriting Day, they have launched a new website, Campaign For Cursive. “The website will promote awareness of the need to keep handwriting in the curriculum, and show kids that handwriting is cool,” stated Sheila Lowe, President of the AHAF.

The group is supporting Senator Jean Leising of Indiana, whose bill to return cursive writing to the curriculum is scheduled for a vote on Wed., Jan. 23. “Child psychologists, doctors and researchers have used neuro-imaging scans to show finger movement associated with handwriting activates regions in the brain linked to cognitive, language and even motor processes. In other words, cursive writing isn’t just a good ability to have. Instead, we are now hearing that handwriting skills are crucial for success in school, basic development and learning potential in general,” stated Senator Leising in an email.

For more information and articles , visit

Also have the pleasure of meeting our new Mascot, “Mr Brainy” showing you that handwriting is fun and beautiful to learn.

Please do leave your comments and feel free to contact me on faridahbharmal@gmail.com for any information you want. I would also encourage you to read my articles Cursive Writing And its Importance