Arnab Goswami Case : How the genuineness of a note can be known and Suicide indicators in a sample 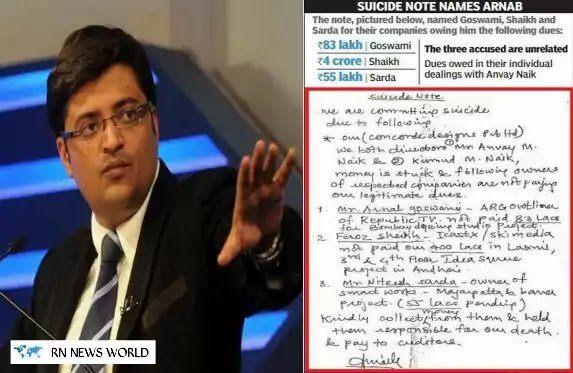 We are well aware of the present case in which Arnab Goswami is charged with the abetment of suicide case of Mr. Anvay Naik. The suicide note is also present and I am writing this article because it has various angles to it and as a Graphologist and Counselour, I want to share my learnings with my audience. So we will look at this case in 3 ways

Let’s look at this suicide note from a Graphology point of view. Suicide is a scary action, however, the person contemplating has to be going through various psychological issues and some indicators can be seen in the writing of a person, a trained Graphologist will be able to look for such danger signs, however understanding the human mind and its mysteries takes time, effort to learn and deep psychological understanding. 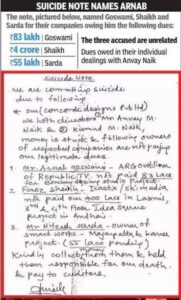 Some Suicidal indicators which a Graphologist looks for in a Handwriting sample are:

All traits need not be present in one sample, for instance, I can find 4-5 traits in Mr. Anvay Naiks writing sample in Arnab Goswami case. Now let’s look at it from a Psychology point of view and analyze the situation.

According to WHO, “ Close to 800,000 people die due to suicide every year, which is one person every 40 seconds. Suicide is a global phenomenon and occurs throughout the lifespan.”

Anyone who has contemplated this move has to be feeling hopeless, worthless, and does not have anything to look forward to in their lives. They might show extreme agitation and anxiousness, sleep pattern changes and alcohol or drug abuse add more fuel to the fire. They will talk about how life doesn’t have any meaning left and talk about going far away or try to finish the leftover work which is pending for them. They feel trapped and alone and unable to converse with anyone, therefore avoid social interaction with others.

Sometimes they feel like it’s the only way out and somehow find the courage to end it all. It’s, therefore, a huge necessity and responsibility of every individual to look out for these signs and get help at the earliest, individuals who commit suicide initially cry out for help, they tell you that they have nothing left to live for. If you feel anyone you know is at immediate risk of self-harm, connect with a counsellour or visit this link for help

Once the suicide has occurred, a few times a suicide note is also found, as in the Arnab Goswami – Anway Naik Case, and the forensic department works on the authenticity of the note. Many factors are considered because it’s imperative to check the genuineness of the note and whether it was written by the victim or not. The people who check these details are the forensic team -part of which is The Forensic Document Examination.

Questioned Document Examination is a branch of forensic science that deals with the application of scientific methods and principals for document examination. This helps to produce evidence about a questioned document that is admissible in the court of law to prove its legitimacy.

There are many types of questioned documents that are examined by document examiners such as cheques, wills, licenses, passports, id cards, currency notes, suicide notes, etc. Some of the factors which are checked for are

Writing skills take a long time to develop in a person and as such, they tend to exert a strong influence on the writing of an individual. It is difficult to change movements quickly in order to create different style letters. It is for these reasons that the handwriting of a mature individual is identifiable. Hence the Suicide note has a Scientific procedure attached to it in order to prove its authenticity and the courts of law look for substantial evidence when people are named in the suicide note.

In the case of Arnab Goswami and Anway Naik, there are many questions that come to mind, why was no action taken on the note 2 years back? why no arrest was made? How is the current document being analyzed? What happened to the other two individuals mentioned in the note?

I will leave you with the above questions because suicide is the final step, but let’s learn to recognize symptoms and calls for desperate help which their people make before the act. Are we willing to listen?